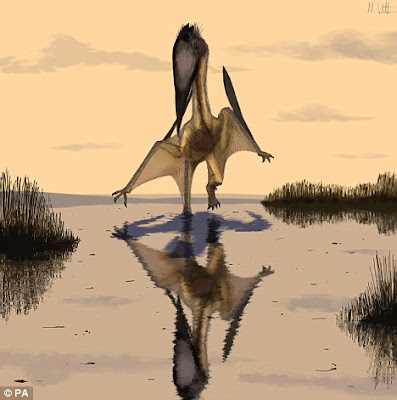 Lacusovagus magnificens, a new species of the toothless pterosaur family Chaoyangopteridae from Brazil is the only example of this group to be found outside China and is the largest one ever discovered.

Mark Witton identified the creature from a partial skull fossil from which he was able to estimate that it would have had a five-metre wingspan - bigger than a family car - and would stand over one metre tall at the shoulder.

He said: “Some of the previous examples we have from this family in China are just 60 centimetres long - as big as the skull of the new species. Put simply, it dwarfs any chaoyangopterid we’ve seen before by miles.” 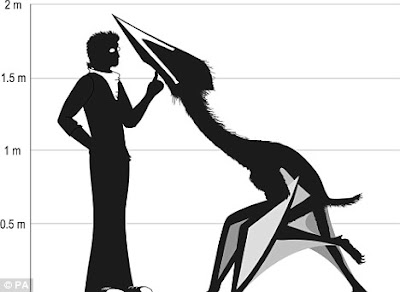 Lacusovagus means ‘lake wanderer’and was named after the large body of water in which the remains were buried.

He was asked to examine the specimen which had lain in a German museum for several years after its discovery in the Crato Formation of the Araripe Basin in North East Brazil, an area well known for the its fossils and their excellent state of preservation. However, he said that this fossil was preserved in an unusual way, making its interpretation difficult.

“Usually fossils like this are found lying on their sides but this one was lying on the roof of its mouth and had been rather squashed which made even figuring out whether it had teeth difficult. Still, it’s clear to see that Lacusovagus had an unusually wide skull which has implications for its feeding habits - maybe it liked particularly large prey.

The remains are very fragmentary, however, so we need more specimens before we can draw any conclusions.”

Say, whatever did happen to Fred from “Scooby Doo”? Isn’t that him as the scale model in the above diagram?
Posted by Michael J. Ryan, Ph.D. at 9:43 AM