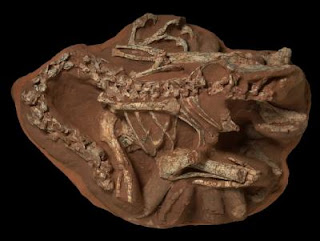 A new study suggests that males from three types of dinosaurs were sole care givers for their mate's eggs. They may even have had multiple mates and watched all their eggs at once.

The dinosaurs in the study were close ancestors of birds, and their fossils were found on top of unusually large clutches. It’s possible that the males mated with several females who laid their eggs in one large clutch. When the females left, the males incubated and protected the eggs on their own.

Scientists came to that conclusion after examining the clutch size and internal bone structures in Troodon, Oviraptor and Citipati dinosaurs. Previous studies had found that the dinosaurs shared several reproductive features with living birds. They both produced asymmetric eggs with nearly identical eggshell, for example. Adult dinosaurs were also found on top of clutches, possibly brooding the eggs.

To further test the theory, the paleontologists examined the bones of adult dinosaurs found on top of clutches in Montana and Mongolia. None of the bones contained tissue normally associated with egg-laying females. Female birds store minerals for egg-laying as extra tissue in the inside of their hollow limb bones.

Abstract: The repeated discovery of adult dinosaurs in close association with egg clutches leads to speculation over the type and extent of care exhibited by these extinct animals for their eggs and young. To assess parental care in Cretaceous troodontid and oviraptorid dinosaurs, we examined clutch volume and the bone histology of brooding adults. In comparison to four archosaur care regressions, the relatively large clutch volumes of Troodon, Oviraptor, and Citipati scale most closely with a bird-paternal care model. Clutch-associated adults lack the maternal and reproductively associated histologic features common to extant archosaurs. Large clutch volumes and a suite of reproductive features shared only with birds favor paternal care, possibly within a polygamous mating system. Paternal care in both troodontids and oviraptorids indicates that this care system evolved before the emergence of birds and represents birds' ancestral condition. In extant birds and over most adult sizes, paternal and biparental care correspond to the largest and smallest relative clutch volumes, respectively.
Posted by Michael J. Ryan, Ph.D. at 5:19 PM