Pioneer French biologist who is noted for his speculations about the evolution of living things, 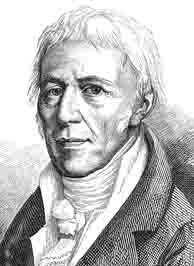 particularly his theory that acquired traits are inheritable (such as giraffes who, he said, through stretching to reach tall trees, make their necks longer, and then pass on longer necks to their offspring.) This Lamarckism idea is controverted by Darwinian theory.

He published a flora of France (1778) and a system of classification for invertebrate animals, published in his Histoire naturelle des animaux sans vertebres (7 vols, 1815-22). In 1809 Lamarck published his theory of evolution (in Philosophie zoologique). Lamarck's speculations about the physical and natural world found little favour among his contemporaries and he died blind and in poverty.

From info on Lamarck from The Victorian Web.
Posted by Michael J. Ryan, Ph.D. at 9:31 AM