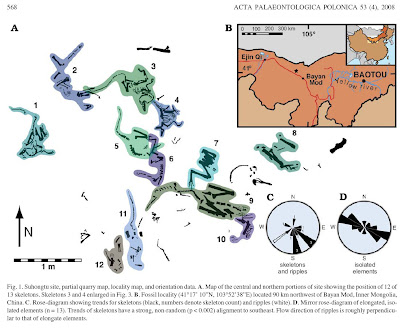 Abstract: A unique dinosaur assemblage from the Cretaceous beds of western Inner Mongolia preserves geologic and paleontologic data that clearly delineate both the timing and mechanism of death. Over twenty individuals of the ornithomimid Sinornithomimus dongi perished while trapped in the mud of a drying lake or pond, the proximity and alignment of the mired skeletons indicating a catastrophic mass mortality of a social group. Histologic examination reveals the group to consist entirely of immature individuals between one and seven years of age, with no hatchlings or mature individuals. 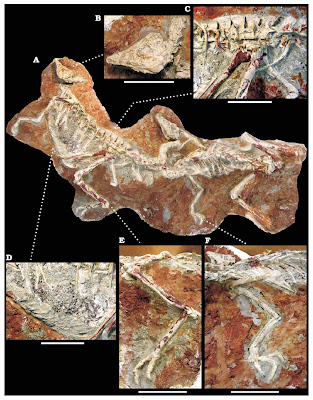 The Sinornithomimus locality supports the interpretation of other, more taphonomically ambiguous assemblages of immature dinosaurs as reflective of juvenile sociality. Adults of various nonavian dinosaurs are known to have engaged in prolonged nesting and post hatching parental care, a life history strategy that implies juveniles spent considerable time away from reproductively active adults. Herding of juveniles, here documented in a Cretaceous ornithomimid, may have been a common life history strategy among nonavian dinosaurs reflecting their oviparity, extensive parental care, and multi−year maturation.

You should also read the original paper about this site and the description of Sinornithomimus dongi also published in APP back in 2003:

A new ornithomimid dinosaur with gregarious habits from the Late Cretaceous of China. Yoshitsugu Kobayashi and Jun-Chang Lü. Acta Palaeontologica Polonica 48 (2), 2003: 235-259. Download the paper by clicking on the title. 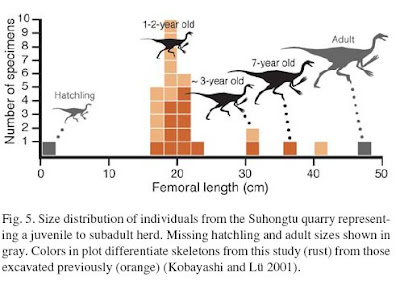