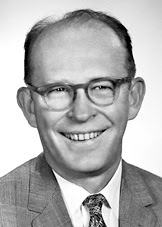 Libby was an American chemist who won the Nobel Prize for Chemistry in 1960 for developing the technique of carbon-14 dating. Duing WWII he worked on the Manhattan Project. Libby was responsible for the gaseous diffusion separation and enrichment of the Uranium-235 which was used in the atomic bomb.

On 18 May 1952, he determined that the age of Stonehenge was 1848 BC, based on analysis of radioisotopes in charcoal. He also discovered that tritium could be used for dating water.
Posted by Michael J. Ryan, Ph.D. at 9:15 AM