The Paranasal Air Sinuses of Predatory and Armored Dinosaurs (Archosauria: Theropoda and Ankylosauria) and Their Contribution to Cephalic Structure. 2008. L. M. Witme and R. C. Ridgely. The Anatomical Record 291: 1362-1388. Download the pdf. 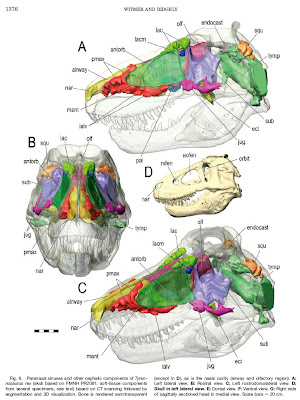 A new study by Lawrence Witmer and Ryan Ridgely found that dinosaurs had more air cavities in their heads than expected. By using CT scans, the scientists were able to develop 3-D images of the dinosaur skulls that show a clearer picture of the physiology of the airways.

Theropods:
The analysis of the predatory dinosaurs revealed large olfactory areas, much greater than the brain cavity.

The CT scans also allowed them to calculate the volume of the bone, air space, muscle and other soft tissues to make an accurate estimate of how much these heads weighed when the animals were alive. A fully fleshed-out T. rex head (above), for example, weighed more than 1,100 pounds.

The air spaces helped lighten the load of the head, making it about 18 percent lighter than it would have been without all the air. That savings in weight could have allowed the predators to put on more bone-crushing muscle or even to take larger prey.

These sinus cavities also may have played a biomechanical role by making the bones hollow, similar to the hollow beams used in construction — both are incredibly strong but don’t weigh as much their solid counterparts. A light but strong skull enabled these predators to move their heads more quickly and helped them hold their large heads up on cantilevered necks.

Ankylosaurs:
The nasal passages in armored dinosaurs were found to be convoluted and complex, and didn’t funnel directly to the lungs or air pockets. 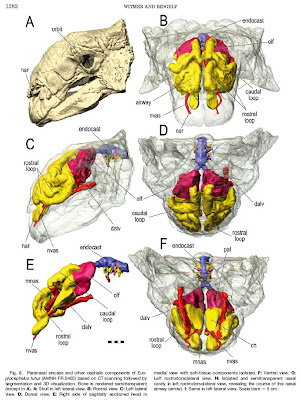 “Not only do these guys have nasal cavities like crazy straws, they also have highly vascular snouts. The nasal passages run right next to large blood vessels, and so there’s the potential for heat transfer. As the animal breathes in, the air passed over the moist surfaces and cooled the blood, and the blood simultaneously warmed the inspired air,” said Witmer. “These are the same kinds of physiological mechanisms we find all the time in warm-blooded animals today.”

These twisty nasal passages also acted as resonating chambers that affected how the ankylosaurs vocalized. The complex airways would have been somewhat different in each animal and might have given the dinosaurs subtle differences in their voices. 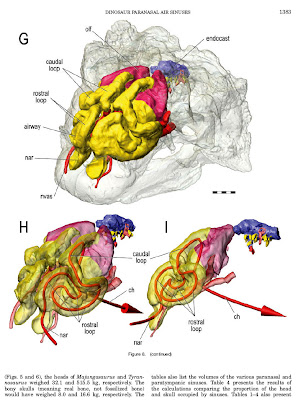 Though few similarities were found between the dinosaur and human sinuses—our brain cavities take up much more space relative to our sinuses— the scientists did find a resemblance between the air spaces of the crocodiles and ostriches and the ancient beasts under study.

“Extra air space turns out to be a family characteristic,” he said, “but the sinuses may be performing different roles in different species. Scientists have tended to focus on things such as bones and muscle, and ignored these air spaces. If we’re going to decipher the mysteries of these extinct animals, maybe we need to figure out just why it is that these guys were such airheads.”
Posted by Michael J. Ryan, Ph.D. at 4:36 PM