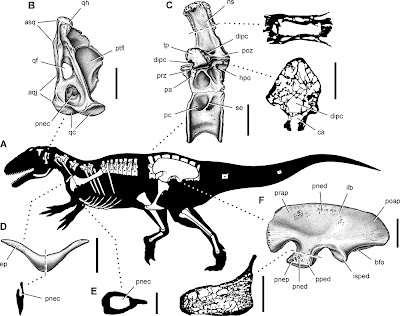 In addition to describing the new theropod, Aerosteon riocoloradensis, The authors present a four-phase model for the evolution of avian air sacs and costosternal-driven lung ventilation based on the known fossil record of theropod dinosaurs and osteological correlates in extant birds:

(3) Phase III—Evolution of a primitive costosternal pump in maniraptoriform theropods before the close of the Jurassic.

(4) Phase IV—Evolution of an advanced costosternal pump in maniraptoran theropods before the close of the Jurassic.

In addition, they conclude:

(6) The origin and evolution of avian air sacs may have been driven by one or more of the following three factors: flow-through lung ventilation, locomotory balance, and/or thermal regulation.
Posted by Michael J. Ryan, Ph.D. at 10:56 PM