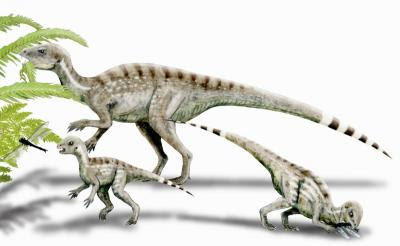 The teeth suggest Heterodontosaurus practiced occasional omnivory: the canines were used for defense or for adding small animals such as insects to a diet composed mainly of plants. Credit: Natural History Museum.
The 45 mm skull of a very young Heterodontosaurus, an early dinosaur. is described in the latest l issue of the Journal of Vertebrate Paleontology. The researchers describe important findings from this skull that suggest how and when the ornithischians, the family of herbivorous dinosaurs that includes Heterodontosaurus, made the transition from eating meat to eating plants.

Heterodontosaurs, which means "different-toothed lizards," have an unusual combination of teeth, with large fang-like canines at the front of their jaws and worn, molar-like grinding teeth at the back. In contrast, most reptiles have teeth which change little in shape along the length of the jaw.

"It's likely that all dinosaurs evolved from carnivorous ancestors," said Laura Porro. "Since heterodontosaurs are among the earliest dinosaurs adapted to eating plants, they may represent a transition phase between meat-eating ancestors and more sophisticated, fully-herbivorous descendents."

Researchers suspect that the canines were used as defensive weapons against predators, or for adding occasional small animals such as insects, small mammals and reptiles to a diet composed mainly of plants--what the authors refers to as "occasional omnivory."

Heterodontosaurus also lacks replacement teeth, making it more similar to mammals, not only in the specialized, variable shape of its teeth but also in replacing its teeth slowly, if at all, and developing tight tooth-to-tooth contact. "Tooth replacement must have occurred during growth," the authors conclude, "however, evidence of continuous tooth replacement appears to be absent, in both adult and juvenile specimens."