University of Utah geologists identified an amazing concentration of dinosaur footprints that they call "a dinosaur dance floor," located in a wilderness on the Arizona-Utah border where there was a sandy desert oasis 190 million years ago. 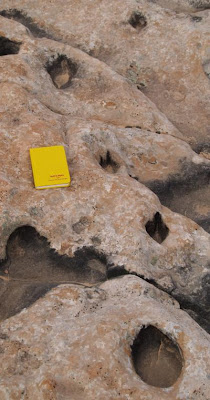 The three-quarter-acre site – which includes rare dinosaur tail-drag marks – provides more evidence there were wet intervals during the Early Jurassic Period, when the U.S. Southwest was covered with a field of sand dunes larger than the Sahara Desert.

Located within the Vermilion Cliffs National Monument, the site has more than 1,000 and perhaps thousands of dinosaur tracks, averaging a dozen per square yard in places. The tracks once were thought to be potholes formed by erosion. The site is so dense with dinosaur tracks that it reminds geologists of a popular arcade game in which participants dance on illuminated, moving footprints.

Seiler says the range of track shapes and sizes reveals at least four dinosaur species gathered at the watering hole, with the animals ranging from adults to youngsters.

The 6 cm-wide tail-drag marks – which are up to 7 m long – are a special discovery because there are fewer than a dozen dinosaur tail-drag sites worldwide, Seiler says. Four tail drags were within the 10 plots he surveyed, and there are others nearby.

"Dinosaurs usually weren't walking around with their tails dragging," he says.
Posted by Michael J. Ryan, Ph.D. at 9:20 AM