The Colour Of Evolution 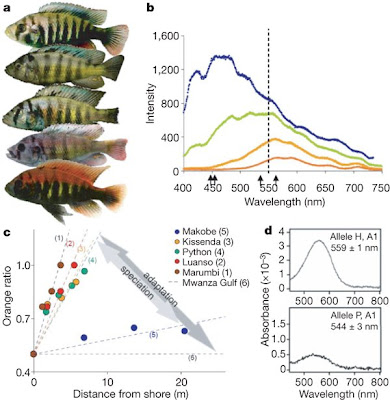 A group of colorful fishes in Africa's Lake Victoria have been the focus of scientific efforts to unravel how new species form. This lake contains more than 500 species of cichlids, which play a leading role because of their rapid speciation and remarkable diversity.

Now a new study suggests that species of Lake Victorian cichlids became new species after changes in how they see led to changes in the mates that they selected. The group say that the phenomenon provides evidence that differences in sensory perception contribute to the development of new species.

For many years, scientists have linked evolution to the environment and suggested that new species arise when populations become geographically isolated from one another, thus forcing them to adapt differently. The idea that organisms living right next to each other can separate into two new species has been proposed, but difficult to prove.

The waters of Lake Victoria, which borders Uganda, Kenya, and Tanzania, are murky and red light penetrates deeper than blue light. In the shallow waters, the male fish tend to be green to blue, and in the deeper waters, the male fish are marked by a brilliant red. "These fish specialized to different microhabitats," Carleton explains, "which in this case is different depths. The visual system then specialized to the light environment at these depths and the mating colors shifted to match. Once this happened, these two groups no longer interbred and so became new species."

Previous research had identified long and short wavelength sensitive variants in one of the genes responsible for tuning the fish's vision to different depths. For this new study, the researchers sequenced hundreds of fish captured in the wild and showed that these visual variants segregate with depth and male color, supporting the idea that these fish have specialized to inhabit these micro niches.
Posted by Michael J. Ryan, Ph.D. at 11:09 AM