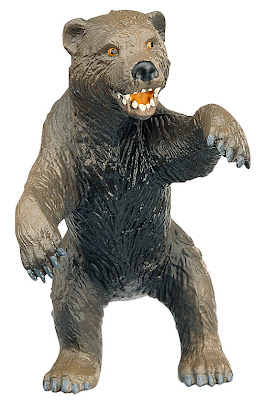 image
Abstract: Retrieving a large amount of genetic information from extinct species was demonstrated feasible, but complete mitochondrial genome sequences have only been deciphered for the moa, a bird that became extinct a few hundred years ago, and for Pleistocene species, such as the woolly mammoth and the mastodon, both of which could be studied from animals embedded in permafrost.

To enlarge the diversity of mitochondrial genomes available for Pleistocene species, we turned to the cave bear (Ursus spelaeus), whose only remains consist of skeletal elements. We collected bone samples from the Paleolithic painted cave of Chauvet-Pont d'Arc (France), which displays the earliest known human drawings, and contains thousands of bear remains. We selected a cave bear sternebra, radiocarbon dated to 32,000 years before present, from which we generated overlapping DNA fragments assembling into a 16,810-base pair mitochondrial genome.

Together with the first mitochondrial genome for the brown bear western lineage, this study provides a statistically secured molecular phylogeny assessing the cave bear as a sister taxon to the brown bear and polar bear clade, with a divergence inferred to 1.6 million years ago.

With the first mitochondrial genome for a Pleistocene carnivore to be delivered, our study establishes the Chauvet-Pont d'Arc Cave as a new reservoir for Paleogenetic studies. These molecular data enable establishing the chronology of bear speciation, and provide a helpful resource to rescue for genetic analysis archeological samples initially diagnosed as devoid of amplifiable DNA.