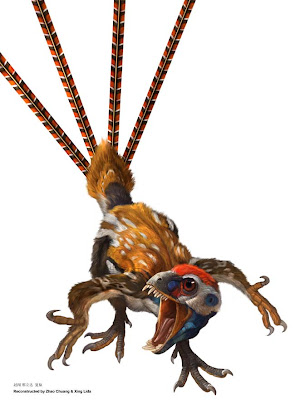 Epidexipteryx, a new feathered dinosaur from the Jurassic Period, likely used its long tail feathers for display and possibly to help with balance while creeping along tree branches. Credit: Zhao Chuang & Xing Lida.
Abstract: Recent coelurosaurian discoveries have greatly enriched our knowledge of the transition from dinosaurs to birds, but all reported taxa close to this transition are from relatively well known coelurosaurian groups.

Here we report a new basal avialan, Epidexipteryx hui gen. et sp. nov., from the Middle to Late Jurassic of Inner Mongolia, China. This new species is characterized by an unexpected combination of characters seen in several different theropod groups, particularly the Oviraptorosauria. Phylogenetic analysis shows it to be the sister taxon to Epidendrosaurus, forming a new clade at the base of Avialae.

Epidexipteryx also possesses two pairs of elongate ribbon-like tail feathers, and its limbs lack contour feathers for flight. This finding shows that a member of the avialan lineage experimented with integumentary ornamentation as early as the Middle to Late Jurassic, and provides further evidence relating to this aspect of the transition from non-avian theropods to birds. 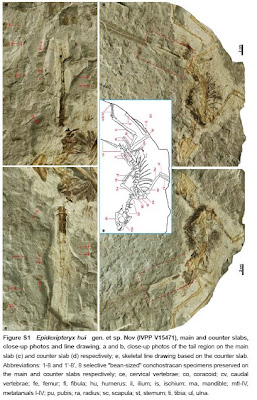 Read the story at Live Science 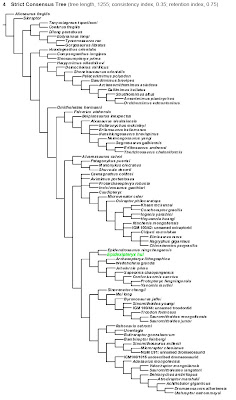