Volcanic Origin For Life On Earth

The building blocks of life may have emerged in volcanic eruptions on the early Earth, according to a new analysis of classic experiments performed more than fifty years ago. Using modern techniques to examine samples from the original experiments, researchers discovered previously undetectable organic compounds that point to the possible contribution of volcanism to the beginning of life on Earth. 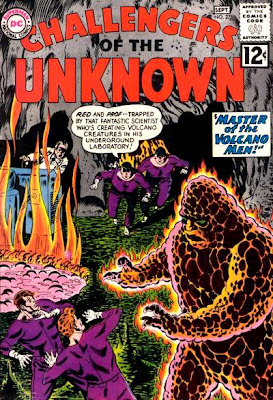 Challengers of the Unknown © DC Comics
From the press release:

The original experiments, performed by Stanley Miller at the University of Chicago in 1953 and 1954 (Miller died in 2007), were the first to demonstrate that the basic molecules of life could be synthesized by subjecting hydrogen-rich gases (such as methane and ammonia) to an electric spark, simulating lightning in the primordial atmosphere. Scientists no longer think that the primordial atmosphere as a whole had the make-up assumed by Miller's experiments, but the clouds of gases emitted during volcanic eruptions do have a hydrogen-rich composition. Volcanic eruptions may have been very common during the planet's hot, early stages. 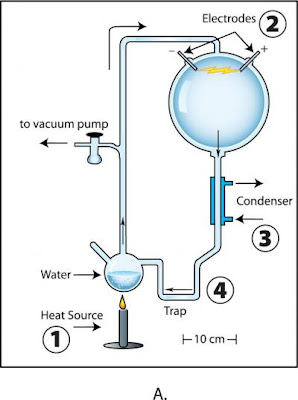 The apparatus used for Miller's original experiment. Boiled water (1) creates airflow, driving steam and gases through a spark (2). A cooling condenser (3) turns some steam back into liquid water, which drips down into the trap (4), where chemical products also settle. Image: Ned Shaw, Indiana University
"It turns out that some of the experiments Miller performed simulated the steam from volcanic eruptions, in addition to the more famous experiments that simulated a hydrogen-rich atmosphere," says H. James Cleaves, of the Carnegie Institution's Geophysical Laboratory, one of the paper's co-authors and Miller's last graduate student. "And when we analyzed samples left over from these volcanic experiments, they contained the most varied mixture of compounds."

Cleaves points out that lighting is very commonly associated with volcanic clouds, and could have been an abundant source of energy to convert simple compounds into organic molecules. 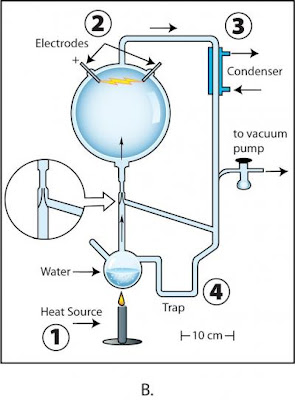