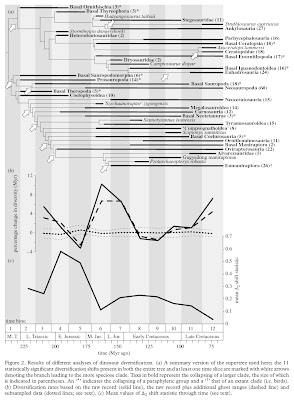 Click to enlarge
Abstract: The observed diversity of dinosaurs reached its highest peak during the mid- and Late Cretaceous, the 50Myr that preceded their extinction, and yet this explosion of dinosaur diversity may be explained largely by sampling bias. It has long been debated whether dinosaurs were part of the Cretaceous Terrestrial Revolution (KTR), from 125–80Myr ago, when flowering plants, herbivorous and social insects, squamates, birds and mammals all underwent a rapid expansion.

Although an apparent explosion of dinosaur diversity occurred in the mid-Cretaceous, coinciding with the emergence of new groups (e.g. neoceratopsians, ankylosaurid ankylosaurs, hadrosaurids and pachycephalosaurs), results from the first quantitative study of diversification applied to a new supertree of dinosaurs show that this apparent burst in dinosaurian diversity in the last 18 Myr of the Cretaceous is a sampling artefact. Indeed, major diversification shifts occurred largely in the first one-third of the group's history.

Despite the appearance of new clades of medium to large herbivores and carnivores later in dinosaur history, these new originations do not correspond to significant diversification shifts. Instead, the overall geometry of the Cretaceous part of the dinosaur tree does not depart from the null hypothesis of an equal rates model of lineage branching. Furthermore, we conclude that dinosaurs did not experience a progressive decline at the end of the Cretaceous, nor was their evolution driven directly by the KTR.
Posted by Michael J. Ryan, Ph.D. at 2:20 PM