The new analysis presents several lines of evidence that support the idea that stromatolites were formed by mats of microscopic organisms. 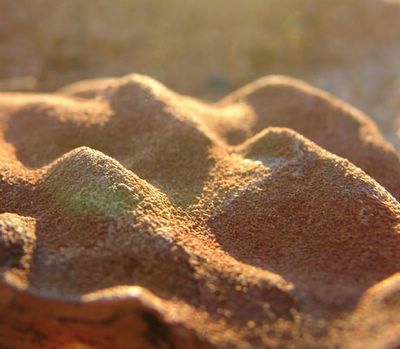 Determining the biogenicity of such ancient fossils is the subject of ongoing debate. However, many obstacles to interpretation of the fossils are overcome in the SPC because of the broad extent, excellent preservation and morphological variety of its stromatolitic outcrops—which provide comprehensive palaeontological information on a scale exceeding other rocks of such age.

Here we present a multi-kilometre-scale palaeontological and palaeoenvironmental study of the SPC, in which we identify seven stromatolite morphotypes—many previously undiscovered—in different parts of a peritidal carbonate platform. We undertake the first morphotype-specific analysis of the structures within their palaeoenvironment and refute contemporary abiogenic [non-living] hypotheses for their formation. Finally, we argue that the diversity, complexity and environmental associations of the stromatolites describe patterns that—in similar settings throughout Earth's history—reflect the presence of organisms.
Posted by Michael J. Ryan, Ph.D. at 8:53 PM