A new fossil from the Age of the Dinosaurs suggests modern crocodiles first evolved in Gondwana. 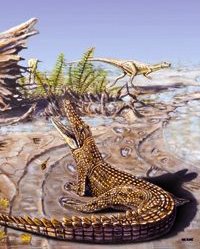 in Queensland. Until now the kinds of creatures that seemed to be the ancestors of all modern crocodiles have come from places like Belgium, from England, from the USA," says team member Dr Paul Willis.

Willis and colleagues analysed two fossilised skeletons first discovered in the mid-1990s in a creek bed in Isisford, in central-western Queensland, by former deputy mayor of the town, Ian Duncan. One specimen is almost a complete skeleton with just the snout and face of the crocodile missing. The other is a complete skull.

"Between the two we have a complete skeleton," says Willis. "We know what the whole animal looked like and it's very rare to get that."