The first images of a live specimen of a small, furry animal once believed to have gone extinct more than 11 million years ago have been captured during a Southeast Asian expedition led by a retired Florida State University researcher. 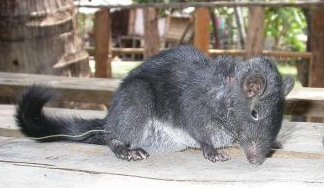 From the FSU press release:

Redfield's video shows a docile, squirrel-sized animal covered with dark, dense fur and bearing a long tail that's not as bushy as that of a typical squirrel. Perhaps the most striking observation is how the animal walks -- like a duck. Clearly not adapted to climbing trees, the rock rat exhibits a duck-like waddle with its hind feet splayed out at an angle to its body. 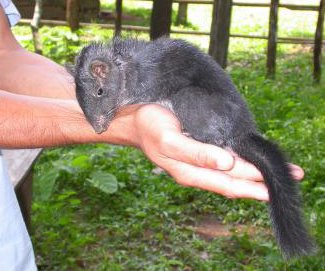 Known as kha-nyou (pronounced "ga-noo") in Lao villages near its habitat, the animal was first described scientifically in the April 2005. Identified as a member of an entirely new family of mammals, the rock rat made news around the world. It gained international attention again on March 10 of this year when scientists published a paper in Science magazine re-identifying the animal as a "living fossil" whose last remaining relatives went extinct 11 million years ago.

The Laotian rock rat so called for its only known habitat -- limestone outcroppings in Central Laos -- and the appearance of the animal's head and face, which sport long whiskers and beady eyes like those of a rat.

To view photographs and video of the Laotian rock rat, visit RockRat.
Posted by Michael J. Ryan, Ph.D. at 7:49 PM