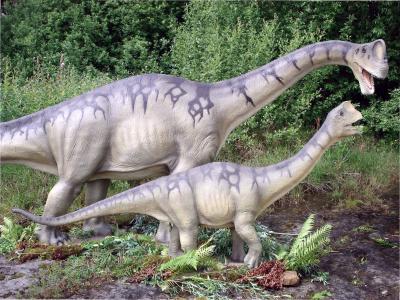 Scientists have determined that the unusually small dinosaur fossils of the new brachiosaurid Europasaurus holgeri which were found in a quarry on the northern edge of the Harz Mountains in 1998, likely were adults. At a maximum estimated weight of one tonne they were only a fiftieth the weight of their closest relatives, the brachiosaurs, and thus by far the smallest of the giant dinosaurs which have ever been found.

The tightly compressed ‘growth rings’ indicate that the dinosaurs must have been fully grown when they died. 'They stopped growing when they reached 6 metres in length and a tonne in body mass,' Martin Sander (below) estimates. Their cousins, by contrast, were up to 45 metres long and weighed in at 80 tonnes – the biggest land animals which have ever existed. 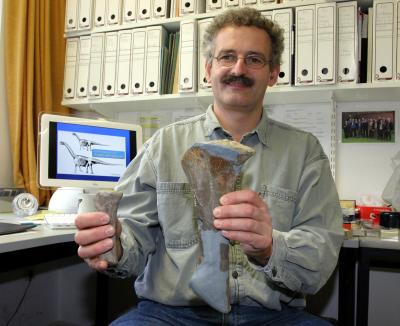 Photo: Frank Luerweg / University of Bonn
The material comes from 150 million year old islands in the area that is now Germany. This island situation may well be the reason why the 'pygmy dinosaurs' evolved -- smaller animals which needed less food had better chances of survival,' explains Nils Knötschke of the Dinopark in Münchehagen, who has exposed more than 80 per cent of the bones found and also headed the excavations in the quarry. 'Shrinkage like this due to a reduction in the food available can take place extremely rapidly, sometimes within 10 or 20 generations,' Dr. Sander confirms.

An international team of scientists have excavated and preserved more than 1000 dinosaur fossils in the quarry since 1998. The life-size models of the mini-dinosaur pictured above can be seen in the Münchehagen dinosaur park. The quarry has also produced pterosaurs, crocodiles, tortoises, and theropod footprints.

Diagram © Octávio Mateus, Museu da Lourinhã
Abstract: Sauropod dinosaurs were the largest animals ever to inhabit the land, with truly gigantic forms in at least three lineages. Small species with an adult body mass less than five tonnes are very rare, and small sauropod bones generally represent juveniles. Here we describe a new diminutive species of basal macronarian sauropod, Europasaurus holgeri gen. et sp. nov., and on the basis of bone histology we show it to have been a dwarf species. The fossils, including excellent skull material, come from Kimmeridgian marine beds of northern Germany, and record more than 11 individuals of sauropods 1.7 to 6.2 m in total body length. Morphological overlap between partial skeletons and isolated bones links all material to the same new taxon. Cortical histology of femora and tibiae indicates that size differences within the specimens are due to different ontogenetic stages, from juveniles to fully grown individuals. The little dinosaurs must have lived on one of the large islands around the Lower Saxony basin. Comparison with the long-bone histology of large-bodied sauropods suggests that the island dwarf species evolved through a decrease in growth rate from its larger ancestor.
Posted by Michael J. Ryan, Ph.D. at 7:44 PM