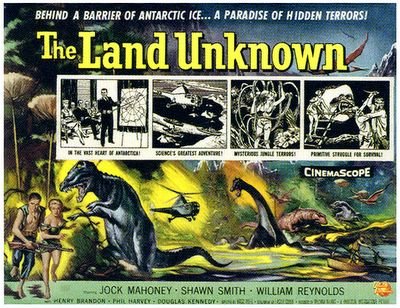 “In 1957, an expedition led by Commander Allen Roberts (Jock Mahoney), and including reporter Margaret Hathaway (Shawn Smith) and Lt. Jack Carmen (William Reynolds), heads via helicopter to the Antarctic. However, they are forced to make an emergency landing and touch down in a Mesozoic-era time warp, where dinosaurs roam and carnivorous plants dot the landscape. Soon they meet mad explorer Carl Hunter (Henry Brandon), who has lived in this amazing place ever since his own helicopter crashed ten years earlier. The group tries to organize an escape while staying free of hungry flora and fauna.”Synopsis from HERE.

Watch the tralier in glorious B&W!: