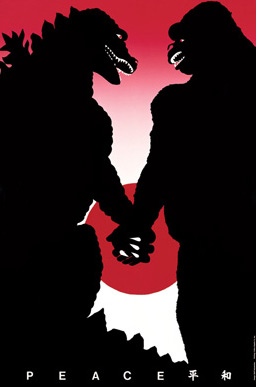 ‘Peace’ by Steff Geissbuhler (1985)
The image encourages reconciliation between two "giant" nations, the U.S. and the U.S.S.R., symbolized by Godzilla and King Kong. The poster was designed to commemorate the 40th Anniversary of the bombing of Hiroshima. It was included in the "Images of Survival" exhibition project organized by the Shoshin Society, Washington, DC.

The poster is part of the show entitled ‘The Graphic Imperative” that is a collection of posters for peace, social justice, and the environment ranging from the years 1965-2005. It’s at the AIGA national Design Center in New York City until August 18, 2006.