Planetary scientists have found evidence of a meteor impact much larger and earlier than the one that killed the dinosaurs -- an impact that they believe caused the biggest mass extinction in Earth's history. 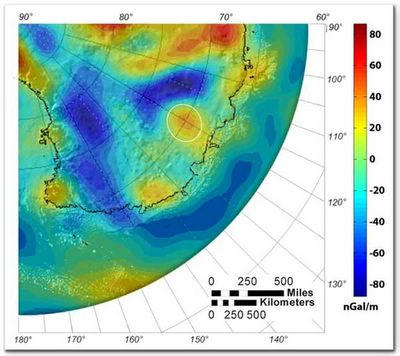 From the Ohio State Research News:

The 300 mile wide crater lies hidden more than a mile beneath the East Antarctic Ice Sheet. And the gravity measurements that reveal its existence suggest that it could date back about 250 million years -- the time of the Permian-Triassic extinction, when almost all animal life on Earth died out.

Its size and location -- in the Wilkes Land region of East Antarctica, south of Australia -- also suggest that it could have begun the breakup of the Gondwana supercontinent by creating the tectonic rift that pushed Australia northward.

Scientists believe that the Permian-Triassic extinction paved the way for the dinosaurs to rise to prominence. The Wilkes Land crater is more than twice the size of the Chicxulub crater in the Yucatan peninsula, which marks the impact that may have ultimately killed the dinosaurs 65 million years ago. The Chicxulub meteor is thought to have been 6 miles wide, while the Wilkes Land meteor could have been up to 30 miles wide -- four or five times wider.

"This Wilkes Land impact is much bigger than the impact that killed the dinosaurs, and probably would have caused catastrophic damage at the time," said Ralph von Frese, a professor of geological sciences at Ohio State University.

"Based on what we know about the geologic history of the region, this Wilkes Land [site] formed recently by geologic standards -- probably about 250 million years ago," he said.

Von Frese and Laramie Potts, a postdoctoral researcher in geological sciences reported their preliminary results in a recent poster session at the American Geophysical Union Joint Assembly meeting in Baltimore.