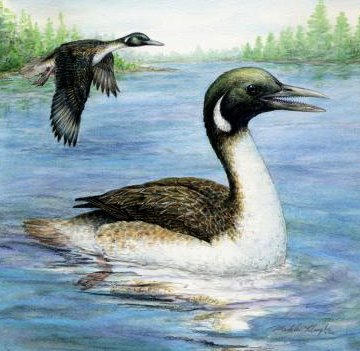 At about 110 million years, Gansus yumenensis is one of the oldest members of the lineage leading to modern birds. New fossil specimens of the loon-like ancient bird help fill in the avian family tree and suggest that today's birds may have gotten their start in aquatic environments.

From the AAAS press release:

The five well-preserved fossils of Gansus described include nearly complete skeletons consisting of three-dimensional, mostly uncrushed bones. Several of the specimens are so exquisitely preserved that the carbonized remains of feathers and even webbing in the foot can be seen clearly.

Details in the hind legs and feet of Gansus indicate that the bird was probably a foot-propelled diver like today's grebes, loons, and many ducks, although they may not have been as good at diving as their modern counterparts, according to Hai-lu You. Gansus belongs to a lineage of birds called the Ornithurae, which includes all modern birds (Neornithes) and their immediate fossil ancestors. Gansus is not a member of the Neornithes, but it is the oldest known ornithurae. Ornithuran birds probably arose in the Early Cretaceous, sometime between 140 and 110 million years ago.

The new fossils were discovered by You and his team near the town of Changma, about 2,000 km west of Beijing, where the first Gansus fossil (a partial hind leg) was found in 1981. Most of the nearly 50 bird specimens found so far at the site appear to be Gansus, the researchers say, which would make it the oldest known fossil locality dominated by ornithuran birds.

Abstract:Three-dimensional specimens of the volant fossil bird Gansus yumenensis from the Early Cretaceous Xiagou Formation of northwestern China demonstrate that this taxon possesses advanced anatomical features previously known only in Late Cretaceous and Cenozoic ornithuran birds. Phylogenetic analysis recovers Gansus within the Ornithurae, making it the oldest known member of the clade. The Xiagou Formation preserves the oldest known ornithuromorph-dominated avian assemblage. The anatomy of Gansus, like that of other non-neornithean (nonmodern) ornithuran birds, indicates specialization for an amphibious life-style, supporting the hypothesis that modern birds originated in aquatic or littoral niches.