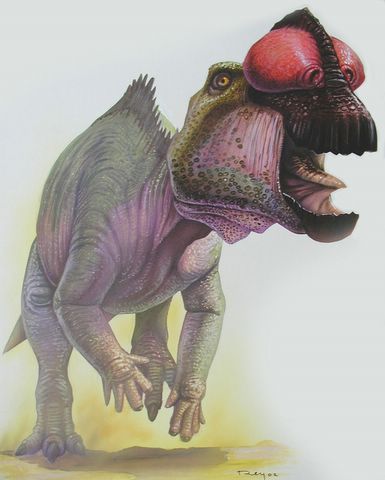 Muttaburrasaurus © Luis Rey from his site

The Courier Mail has a nice article on some of the dinosaur and other fossil localities found in the Outback of Australia. Here’s an excerpt:

"It was 200km south of Hughenden, at Muttaburra, that Doug Langdon found a strange pile of fossilised bones in 1963 and put his town on the international palaeontology map.

Langdon's skeleton, Muttaburrasaurus langdoni, ended up in the Queensland Museum and the town got a gaudy replica of the dinosaur to put up in its main street – an exchange that some in Muttaburra have resented ever since.

There is said to be another complete dinosaur skeleton lying in a paddock close to town, but its supposed location has not been revealed.

Not that fossilised dinosaurs are in short supply in this country. In 1989, Richmond district brothers Ian and Rob Ievers dug an almost complete skeleton of a 100-million-year-old plesiosaur out of the ground on their family property, and found another preserved dinosaur skeleton of an armoured ankylosaur three months later."