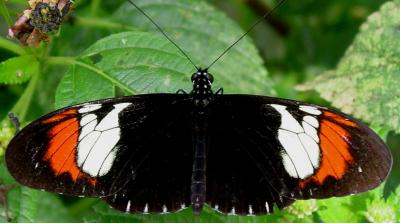 In a matter of months, butterflies sporting the yellow and red wing color pattern of a wild species were created through simple laboratory crosses of two other wild species.

"We recreated the evolutionary steps that may have given rise to Heliconius heurippa, a hybrid butterfly species, in the lab," explains Jesus Mavarez.

Sexual encounters between species resulting in hybrid offspring may be common in nature. However, homoploid hybrid species -- fully sexual hybrid species resulting from crosses between two different parent species -- are still considered to be quite rare. This report of the laboratory creation of a hybrid butterfly nearly identical to a known wild species, and the observation that hybrid individuals don't mate with either parent species, provides the most convincing case to-date for homoploid hybrid speciation in animals.

The process of speciation usually occurs when one species splits into two, but there are some cases in which new species result from the mating between two good species. Usually when members of different species mate, their offspring die or are infertile. On occasion, polyploid hybrids -- individuals with multiple copies of their parents' chromosomes, survive and establish a new lineage or species. Polyploid hybrid speciation often occurs in plants when polyploid individuals go on to reproduce asexually. Some lizards, frogs, fish and many invertebrates also pull this trick.
Posted by Michael J. Ryan, Ph.D. at 8:04 AM