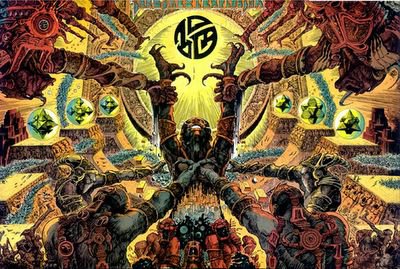 Abstract: The phylogenetic relationships among most metazoan phyla remain uncertain. We obtained large numbers of gene sequences from metazoans, including key understudied taxa. Despite the amount of data and breadth of taxa analyzed, relationships among most metazoan phyla remained unresolved. In contrast, the same genes robustly resolved phylogenetic relationships within a major clade of Fungi of approximately the same age as the Metazoa. The differences in resolution within the two kingdoms suggest that the early history of metazoans was a radiation compressed in time, a finding that is in agreement with paleontological inferences. Furthermore, simulation analyses as well as studies of other radiations in deep time indicate that, given adequate sequence data, the lack of resolution in phylogenetic trees is a signature of closely spaced series of cladogenetic events. 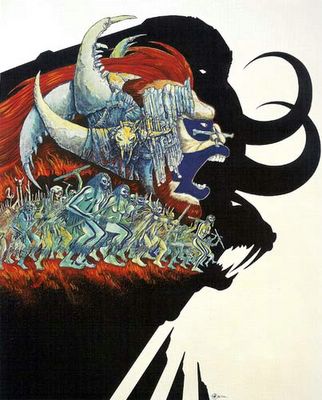 All art ©Philippe Druillet from www.druillet.com.

From the University of Wisconsin-Madison press release:

A branch-by-branch account of animal relationships over the past 500 million years is difficult to reconstruct because early animal evolution occurred in bunches. It seems that the periodic, frenetic bursts of evolution that occurred at certain times in the distant past make sorting out animal relationships -- the branches on the tree -- extraordinarily difficult.

Two decades ago, with the advent of methods to look at the family relationships of different organisms by analyzing DNA, scientists envisioned it would only be a matter of time before the various family trees for plants, animals, fungi and their kin would be resolved with genetic precision.

"[Now] it turns out that early in the origin of many types of animals, there were a lot of branching events in a short period of time," Carroll explains. Those type of episodes at key junctures in life's history -- for example, the rise of complex animals or the migration of vertebrates from the sea to land -- make the animal tree look very bushy and very murky.

The new study used a molecular approach to resolve the family tree of fungi, organisms that originated about the same time as animals. "In contrast to the animals, the tree of fungi, resolved neatly," Rokas explains. "The difficulty we are facing in telling animal relationships apart is evolution's signature that some very interesting evolutionary stuff happened here."

"As you go into deep time, these bursts of evolutionary origins become harder to resolve," Carroll explains. In addition to the complications of deep time, animal life sometimes has a tendency to explode in radiations as organisms exploit new or newly vacant ecological niches. Famous examples of such radiations include, Darwin's finches in the Galapagos and cichlid fish in African lakes.

In that respect, the results of the new study support paleontological evidence of an explosive radiation at the dawn of animal life.
Posted by Michael J. Ryan, Ph.D. at 12:01 AM