The world's largest mass extinction at the end of the Permian period 250 million years ago was probably caused by poisonous volcanic gas, according to this research published today:

From a press release from the Imperial College London:

Many scientists had previously thought that an asteroid hitting the earth or a deep-sea methane release had caused the extinction, which obliterated more than two-thirds of reptile and amphibian families. 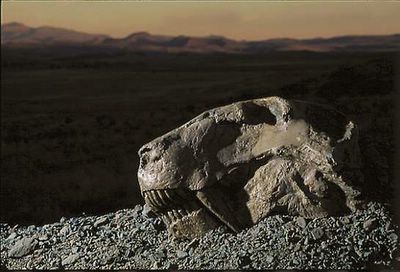 However, analysis of a unique set of molecules found in rocks taken from the Dolomites in Italy has enabled scientists to build up a picture of what actually happened. The molecules are the remains of polysaccharides, large sugar-based structures common in plants and soil, and they tell the story of the extinction. The molecules date from the same time as a major volcanic eruption that caused the greatest ever outpouring of basalt lava over vast swathes of land in present day Siberia.

The researchers believe that the volcanic gases from the eruption, which would have depleted earth's protective ozone layer and acidified the land and sea, killed rooted vegetation. This meant that soil was no longer retained and it washed into the surrounding oceans.

Soil materials in the oceans would have blocked out light and soaked up oxygen. Analysis of rock chemistry suggests that after the soil crisis on land, the marine ecosystem succumbed to the stresses of environmental change and oceanic life faltered, completing a global catastrophe.