Abstract: Long-bone histology indicates that the most common early dinosaur, the prosauropod Plateosaurus engelhardti from the Upper Triassic of Central Europe, had variable life histories. Although Plateosaurus grew at the fast rates typical for dinosaurs, as indicated by fibrolamellar bone, qualitative (growth stop) and quantitative (growth-mark counts) features of its histology are poorly correlated with body size. Individual life histories of P. engelhardti were influenced by environmental factors, as in modern ectothermic reptiles, but not in mammals, birds, or other dinosaurs.

From the University of Bonn press release:

Plateosaurus engelhardti was apparently able to vary the speed of its growth according the conditions of its environment. 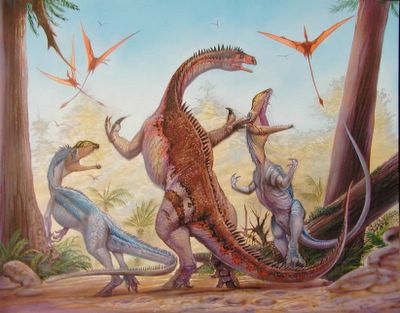 'Basically dinosaurs grew like we do,' the Bonn palaeontologist Dr. Martin Sander explains: 'Each age corresponded to a particular body size.' There was not much leeway involved. Reptiles do things differently: when food is scarce they grow more slowly than when there is food galore. Thus, a tortoise can be 30, 40 or even 60 cm long at the same age. 'Warm-blooded animals, by contrast, cannot so easily turn down their metabolism,' the lecturer says: 'If the food supply is inadequate, there's only one thing they can do – die.'

Dinosaurs lie somewhere in between: although they are descended from the reptiles, many of them had become warm-blooded, most researchers today agree. And they all grew like modern mammals: in accordance with a genetically programmed blueprint and in addition relatively fast. 'At least that's what was thought until recently,' Dr. Sander says. 'However, our findings have thrown this conception into disarray, at least for one dinosaur.'

The growth of dinosaurs' bones was characterised by temporary interruptions, so that 'annual growth rings' can be detected under the microscope, rather like the growth rings of trees. When growth is fast, the distance between the rings is greater. The bone tissue is then permeated with numerous longish cavities. From the bone structure experts can also detect when the animals reached their full size: 'Some had reached their maximum size at 12 years old, others were still growing at 27.

What is above all astonishing is that all the other dinosaurs seemed to show very steady growth. This is not only true of the plateosaur's closest relations, but also of dinosaurs which came onto the evolutionary stage well before plateosaurs and which therefore could perhaps be assumed to have shown a more 'reptilian' type of growth.
Posted by Michael J. Ryan, Ph.D. at 4:55 PM