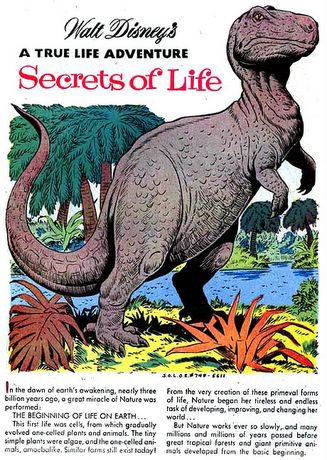 This comic is based on SECRETS OF LIFE, a 1956 feature-length film in WALT DISNEY'S TRUE-LIFE ADVENTURES Academy Award-winning series of nature documentaries. This 33-page adaptation of the feature-length documentary opens with a splash-page depicting an Allosaurus. Then we're shown the origins of life on primitive Earth, with prehistoric invertebrates such as trilobites, scorpions and giant cockroaches.

As land-life flourishes, we're treated to shots of dinosaurs, including an improbable battle (below) between a Tyrannosaurus rex and a sea-going Pleisosaurus. Finally, we see the development of birds (this comic was produced decades before theories about feathered dinosaurs) and mammals, such as the saber-toothed Smilodon. 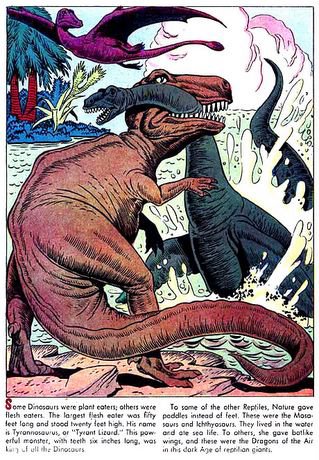 A back-cover summary of the contents of WALT DISNEY'S SECRETS OF LIFE, which reads:

"Thus does Nature show us that in any small part of her broad world maybe seen and explored some of her many Secrets of Life - those strange and ingenious talents for survival with which she has equipped the life she created, whether they be found on the fantastic floor of her oceans, high on her frozen mountain peaks, above her earth or under its crust…or revealed to us in a single fragile flower and one tiny Honeybee."

All the above is from the Oddball Comics site of Scott Shaw!
Posted by Michael J. Ryan, Ph.D. at 10:26 PM