A 150-million-year-old fossil of Archaeopteryx, the earliest known bird, may put to rest any scientific doubt that dinosaurs—specifically the group of two-legged meat-eaters known as theropods—gave rise to modern birds.

Abstract: A nearly complete skeleton of Archaeopteryx with excellent bone preservation shows that the osteology of the urvogel is similar to that of nonavian theropod dinosaurs. The new specimen confirms the presence of a hyperextendible second toe as in dromaeosaurs and troodontids. Archaeopteryx had a plesiomorphic tetraradiate palatine bone and no fully reversed first toe. These observations provide further evidence for the theropod ancestry of birds. In addition, the presence of a hyperextendible second toe blurs the distinction of archaeopterygids from basal deinonychosaurs (troodontids and dromaeosaurs) and challenges the monophyly of Aves. 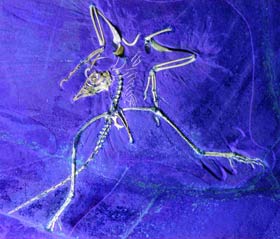 From the article at National Geographic News by Nicolas Bakalar:

Until recently, the new crow-size specimen was housed in a private collection. It is now owned by the Wyoming Dinosaur Center in Thermopolis. The fossil is the ninth example of Archaeopteryx known to science. (A tenth specimen of a winged dinosaur from a closely related genus also exists.) All ten fossils were found in a limestone deposit near Solnhofen, Germany.

The latest specimen is among the best preserved. It is a slightly broken skeleton in a single slab of pure limestone, showing clear wing- and tail-feather impressions. The skull is the only Archaeopteryx specimen that reveals a bird's-eye view of the species' upper head surface.

Archaeopteryx, the fossil shows, had a hyperextendible second toe. Until now, the feature was thought to belong only to the species' close relatives, the deinonychosaurs. Contrary to all previous reconstructions of Archaeopteryx, the hind toe of the new specimen is not completely reversed to form a "perching" foot as it is in modern birds.

The researchers believe that the fully reversed hind toe in other Archaeopteryx fossils shifted during preservation and never existed in the live animal. Because Archaeopteryx lacked this stabilizing toe, it almost certainly did not habitually perch in trees.
Posted by Michael J. Ryan, Ph.D. at 8:22 PM