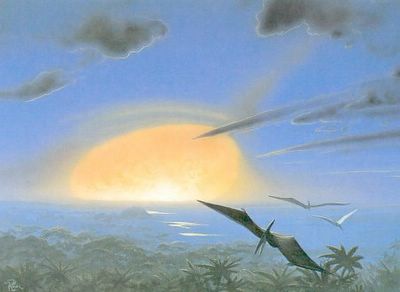 Chris Hawley of the Arizona Republic writes an update about the research currently being done on the Chicxulub crater site, the point of impact for an asteroid that lead to the demise of the dinosaurs at the end of the Cretaceous 65 million years ago.

The Chicxulub (pronounced CHEEK-SHOO-LOOB) Crater is more than 120 miles wide. It lies half on land and half underwater on the northern coast of the Yucatán Peninsula. Chicxulub Puerto, a beachside village 12 miles north of the town of Chicxulub, was ground zero. The area was under water at the time of the disaster 65 million years ago, and coral reefs and sediment have since buried the crater a half-mile deep.

Scientists aren't sure whether it was a comet or meteorite that hit the Earth, but the impact vaporized everything around it, turning Chicxulub into a lake of molten rock, Kring said. The blast threw 25 trillion tons of rock into space. The pieces fell back as a fiery rain of rocks, killing animals and setting most of the world's vegetation on fire. Dust and smoke blotted out the sun, causing an artificial winter.

"You could go on for weeks talking about all the environmental effects this caused," David Kring, University of Arizona geologist said. "There were magnitude 10 earthquakes, tsunamis that dwarfed what happened recently in Indonesia, and incinerating heat."