This Week In Science: Horsing Around

In the latest issue of Science Dr. Bruce Macfadden presents an overview on the evolution of horses. You can read a summary of the article in the press release from the University of Florida:

The fossil record shows horses originated in North America at least 55 million years ago and roamed the continent before becoming extinct at the end of the last Ice Age, about 10,000 years ago. They were reintroduced into the New World in the 1500's by the Spanish and have helped to shape our culture. 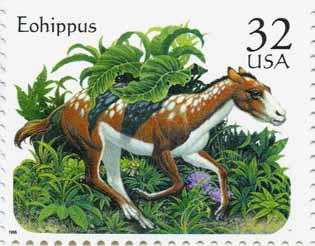 Scientists once universally thought the more primitive horses, which lived from about 55 million to 20 million years ago, were primarily leaf-eating browsers, only becoming grass eaters as the prairie grasslands began to spread rapidly across North America during the Miocene Epoch about 20 million years ago. The reality is not so clear cut according to Dr. Bruce MacFadden of the University of Florida. During times of transition, some groups of horses actually became mixed feeders, eating both grasses and leafy material, he said.

Although modern horses are primarily grazers, they will feed on fruits and leaves when grass is in short supply, MacFadden said. "Horses are highly adaptable," he said. "They can exploit different food resources when they have to and are able to withstand a wide range of climates. They live in the tropics. They extend all the way up to the Arctic." Just as the scientific knowledge about whether horses were browsers or grazers has changed, so have ideas about the evolution of body size, he said.

The preconceived notion that the horse was once as small as a dog but progressively grew to its present stature now can be proven to be incorrect, MacFadden said. About 20 million years ago during the Miocene Epoch, horses diversified in size rather than just becoming larger, MacFadden said. While some grew larger, others became smaller or remained the same size, he said.

MacFadden, who was able to estimate the body size of various species of fossil horses by measuring their teeth because they are proportional to the rest of the body, said the old idea was based on the research of 19th-century paleontologist Edward Drinker Cope. Cope's Law states that within any group of animals there is a tendency for the descendants of a species to grow increasingly larger. "But there are so many exceptions where you go from small to large and back to small again that you have to ask how many exceptions to the rule you can accept before the central concept is no longer correct, he said.

Visit the Fossil Horse Cybermuseum at the Florda Museum of Natural History by clicking here
Posted by Michael J. Ryan, Ph.D. at 12:55 AM