TVShwsOnDVD.com has announced that the old King Kong cartoon TV series will be released November 14th in a 4 disc set (as well as individual discs) for $39.95 from Sony Music: 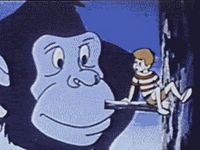 Don't know much about the original show? Well, it was a series of 52, 8-minute cartoons from Rankin-Bass where the big ape was trying to avoid being captured by the evil scientist "Dr. Who", and the Bond family were trying to keep their giant gorilla friend safe. Kong's best friend among the Bonds was young Billy, voiced by Billie Mae Richards, "Rudolph" of Rankin-Bass' now classic Christmas special, "Rudolph the Red-Nosed Reindeer".

Each episode of "The King Kong Show" featured two adventures of Kong, and one episode of "Tom Of T.H.U.M.B." featuring a miniaturized secret agent, Tom, and his Asian sidekick, Swinging Jack. As part of the licensing deal to make this animated series, Rankin/Bass had to promise to make a new live action feature which they did in 1968 ("King Kong Escapes") in conjunction with Toho Productions, the makers of Godzilla.

The Paleoblogger doesn't remember ever seeing this show, but it he did receive a copy of the game (below) from "Sturdy" Steve Bissette, purchased from a cool little shop on the outskirts of Pittsburg during the SVP conference held there in the mid-90's. 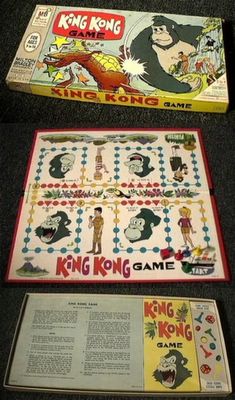 Listen to the theme song from the show from www.toontracker.com by clicking HERE.