Scientists at the American Museum of Natural History and the University of Chicago have explained how a globe-encircling residue formed in the aftermath of the asteroid impact that triggered the extinction of the dinosaurs. The study draws the most detailed picture yet of the complicated chemistry of the fireball produced in the impact. 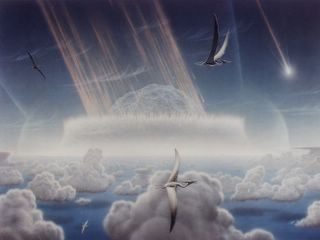 The residue consists of sand-sized droplets of hot liquid that condensed from the vapor cloud produced by an impacting asteroid 65 million years ago. Analyses conducted by Ebel and Grossman show that the droplets must have condensed from the cooling vapor cloud that girdled the Earth following the impact. Ebel and Grossman base their conclusions on a study of spinel, a mineral rich in magnesium, iron and nickel contained within the droplets.

When the asteroid struck approximately 65 million years ago, it rapidly released an enormous amount of energy, creating a fireball that rose far into the stratosphere. "This giant impact not only crushes the rock and melts the rock, but a lot of the rock vaporizes," Grossman said. "That vapor is very hot and expands outward from the point of impact, cooling and expanding as it goes. As it cools the vapor condenses as little droplets and rains out over the whole Earth."

This rain of molten droplets then settled to the ground, where water and time altered the glassy spherules into the clay layer that marks the boundary between the Cretaceous and Tertiary periods. This boundary marks the extinction of the dinosaurs.

Their computer simulations show how rock vaporized in the impact would condense as the fireball cooled from temperatures that reached tens of thousands of degrees. The simulations paint a picture of global skies filled with a bizarre rain of a calcium-rich, silicate liquid, reflecting the chemical content of the rocks around the Chicxulub impact crater.

Run your own computer simulation of an asteroid impact by clicking HERE.
Posted by Michael J. Ryan, Ph.D. at 7:12 AM