From the Proceedings of the Academy of National Sciences: 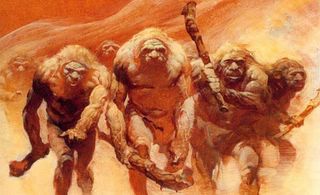 "An international team led by researchers at the Department of Human Evolution, Max Planck Institute for Evolutionary Anthropology in Liepzig, Germany and Washington University in St. Louis, has extracted and sequenced protein from a Neanderthal from Shanidar Cave, Iraq dating to approximately 75,000 years old.

The research presents the sequence for the bone protein osteocalcin from a Neanderthal from Shandivar Cave as well as osteocalcin sequences from living primates (humans, chimpanzees, gorillas and orangutans). The team found that the Neanderthal sequence was the same as modern humans. The team also found a marked difference in the sequences of Neanderthals, humans, chimpanzees and orangutans from that of gorillas and most other mammals. This sequence difference is at position nine where the amino acid hydroxyproline is replaced by proline.

The authors suggest that this is a dietary response, as the formation of hydoxyproline requires vitamin C, which is ample in the diets of herbivores like gorillas, but may be absent from the diets of the omnivorous primates such as humans and Neanderthals, orangutans and chimpanzees. Therefore, the ability to form proteins without the presence of vitamin C may have been an advantage to these primates if this nutrient was missing from their diets regularly."