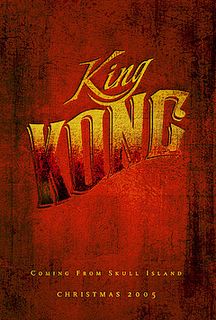 For anyone still under a rock, there's a new film remake of King Kong coming to the movie screens this Dec 15.

Directed by Peter "Lord of The Rings" Jackson, this version boasts a $150 million dollar budget and most of the behind-the-scenes talent that made LOTR an Academy Award-winning success. The palaeoblog is skeptical about the need to remake such a classic film, but we'll give it the benefit of the doubt based on Jackson's track record of superb craftsmanship. We can at least be guaranteed that the dinosaurs featured in it will be state of the art. Above is a very unofficial teaser poster for the movie.

For an update of what's going on with the production read an article from the New York Post by clicking here
Posted by Michael J. Ryan, Ph.D. at 8:45 AM