National Geographic News has an article on the recently discovered new species of 18,000-year old human, Homo florenensis. The new species has been verified based on the study of the braincase published today in Science. 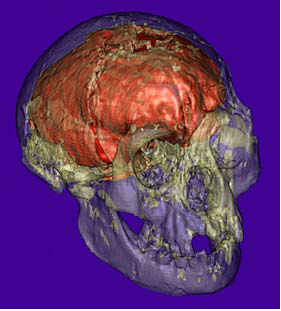 The little human was discovered on the isolated of island of Flores in Indonesia and occupied it from at least 95,000 years ago until around 12,000 years ago.

H. floresiensis grew to be only about one meter high and, despite having a very small brain (roughly the size of a chimpanzee's) they appear to have hunted animals twice their size, made stone tools for hunting and butchering, and used fire for cooking.

"It's remarkable. We've always been taught and thought that as humans evolved, the bigger the brain, the better they are," said Charles Hildebolt, a physical anthropologist at Washington University in St. Louis, Missouri.

"If this little creature actually made the tools and was using the tools, built the fire and was using the fire, then that really tips human evolution upside down and changes the way we have to think about brain evolution. It may indicate that the reorganization of the brain was just as important and may be even more important than size."

Hildebolt was a member of the team, led by paleoneurologist Dean Falk of Florida State University, that studied the braincase of the species.