Dr. Philip Currie Accepts Position At U of Alberta 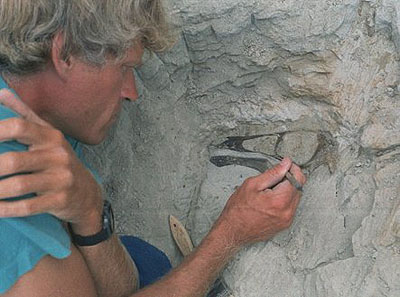 Dr. Currie uncovers the skull of an ornithomimid in Dinosaur Provincial Park, Alberta.

Dr. Philip J. Currie will be leaving his job as Head of Dinosaur Research for the Royal Tyrrell Museum in Drumheller to start a new position with the University of Alberta in Edmonton come this October. The move has been rumored for some time but is now being reported in the Canadian media here and here. Coincidental with this news is the recent posting for a "two-year Post Doctorate in Ornithischian Dinosaurs" at the RTMP that can be viewed here.

For Currie it will be a bit of a homecoming considering that he started his dinosaur-hunting career in Alberta as Head of Vertebrate Palaeontology for the Provincial museum of Alberta located not far from the U of A. Currie's move will also come shortly after the 20 anniversary celebrations this September for the Royal Tyrrell Museum, a world-reknowned center of palaeontological research that he was instrumental in helping to create.

We wish he and his wife, palynologist Dr. Eva Koppelhus, all the best in their trek north from Drumheller. 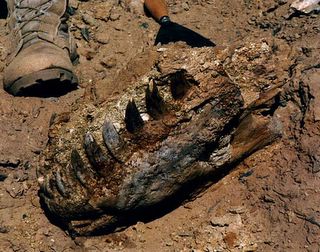 Tarbosaurus jaw found by Dr. Currie in the Gobi Desert.
Posted by Michael J. Ryan, Ph.D. at 7:33 AM