The Paleo Path Part 2: From Alley Oop to The Ancient Great Plains.

V.T. Hamlin's popular comic strip ALLEY OOP established prehistoric themes for its medium, a tradition that continued into the 1990s with Bill Watterson's CALVIN & HOBBES. There were comic cavemen-and-dinosaurs before Hamlin -- I have comic postcards in my own collection dating back to the late 1800s, and comic strips featuring the occasional dinosaur (Winsor McCay's "Dreams of a Rarebit Fiend") and 'lost world' sequence dating back to the early 1900s -- but for the sake of this chronology, take my word for it: Hamlin's the man. Dig, though, that Alley Oop was not a 'dinosaur comic'. Though Alley Oop and his kin cavorted with dinosaurs (including 'Dinny', Oop's faithful brontosaurian steed), "Alley Oop" was not, per se, a 'dinosaur comic'. Like most prehistoric novels, comics, and movies, Hamlin's comic was set in a fantasy universe where men and dinosaurs co-habitated (and yes, there was, later, a time machine involved). 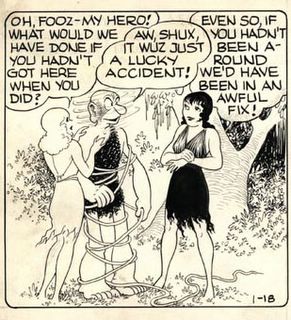 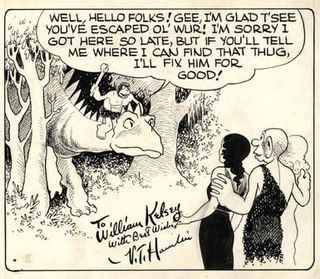 Between 1951-52, Texan cartoonist (and journalist, author, and film historian, among other things) George E. Turner crafted a regionally-published weekly comic strip, "The Ancient Great Plains", for the Amarillo-based SUNDAY NEWS-GLOBE. Working under the guidance of West Texas State College geology professor Dr. Roy H. Reinhart, Turner undertook nothing less than a painstakingly illustrated science comic strip detailing the evolution of life in his home state, rich with the myriad forms of flora and fauna that swam, slithered, stalked and soared across millions of years.

Turner's love of films colored the strip -- the ad art announcing the strip's debut offered Turner's line rendition of the Allosaurus-vs.-Trachodon attack in the 1925 THE LOST WORLD, and King Kong himself made an appearance in a later installment -- and his reconstructions were often drawn from the work of Knight and others. Nevertheless, his work had its own flavor, and one cannot help but be struck by the accomplishments showcased in the sampler of "The Ancient Great Plains" offered by Turner's longtime friend and writing partner Michael H. Price in the revised edition of Turner and Orville Goldner's collaborative KING KONG book, "Spawn of Skull Island" (revised and expanded by Michael H. Price and Douglas Turner; Luminary Press, 2002; see pp. 232-241).

To my knowledge, there had never been anything quite like it in newspapers, comic strips, or comic books, and until someone proffers a precursor, I hereby nominate George Turner as the creator of the first true American 'dinosaur comic'.

The collected THE ANCIENT SOUTHWEST is now available from Texas Christian University Press of Fort Worth. The TCU Press edition contains extensive digital refinements of the surviving newsprint images, scattered revisions in the text, and a standardized job of re-lettering for consistency and clarity. 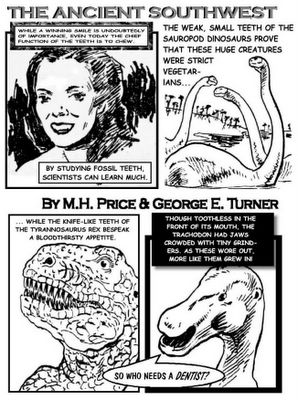 Read Part 1 of the series HERE.

Steve R. Bissette is an artist, writer and film historian who lives in Vermont. He is noted for, amongst many things, his long run as illustrator of SWAMP THING for DC Comics in the 1980's and for self-publishing the acclaimed horror anthology TABOO and a 'real' dinosaur comic TYRANT(R).
Posted by Michael J. Ryan, Ph.D. at 8:41 AM