Scientists have for the first time constructed a fully articulated Neandertal skeleton using castings from real Neanderthal bones. The skeleton was reconstructed by G.J. Sawyer, an anthropologist at the American Museum of Natural History, and Blaine Maley, a graduate student in the Department of Anthropology at Washington University in St. Louis, Missouri. It was primarily based on the La Ferrassie 1 specimen discovered in France in 1909, with missing or incomplete elements filled in from other Neanderthal cast collections. 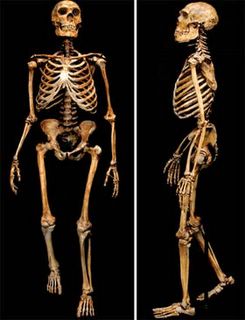 The relationship between Neanderthals and the early modern humans, commonly known as Cro-Magnon beings, is fuzzy. The two groups overlapped in Europe for 10,000 years. The reconstruction could provide scientists with a more complete picture of the stature differences between modern humans and Neandertals.

The new reconstruction suggests some strong differences in the form of the Neanderthal's rib cage and pelvis compared to those of modern humans. The skeleton is 5.4 feet tall although this might have been slightly underestimated, due partly to the use of bone casts from a potentially shorter individual.

The reconstructed skeleton is currently on display at the Dolan DNA Learning Center in Cold Spring Harbor, New York. It will eventually go on permanent display at the American Museum of Natural History in New York City.