As I mentioned in a previous post I was recently back in Ottawa at the Canadian Museum of Nature where I'm a Research Associate to do some work. Below are a few pictures from this (and a previous) trip. 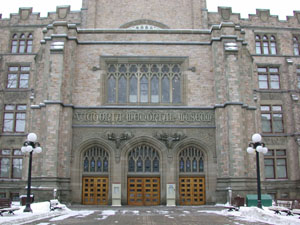 Front doors of the CMN. The museum is a Canadian Heritage Building and was previously known as the Victoria Museum. The fossil collections and offices of the scientists are not housed here, but rather are located across the river in Alymer, Quebec, about 20 km away. If you rotated 180 degrees from where this photo was taken you'd be facing north and would be looking at the Parliment Buildings of Canada's Capital. The dinosaur gallery of the CMN is currently closed for major renovations. 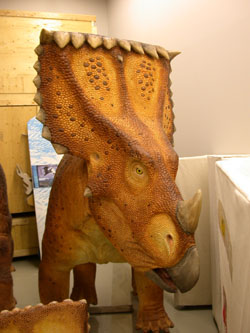 In 2001 I had the pleasure of co-describing this new species of Chasmosaurus invinensis. The species name comes from the small community of Irvine, Alberta, where the dinosaur was discovered by Wann Langston, Jr., in the late 1950's. This model is now on display outside of the museum. 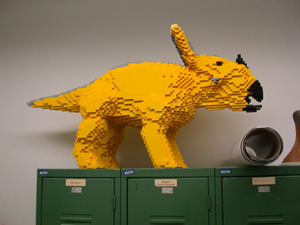 This little Lego Chasmosaurus was built as part of the activities that lead up to the unveiling of the new dinosaur in 2001.
Posted by Michael J. Ryan, Ph.D. at 12:06 PM