In this week's Nature:

Rohde and Muller are two University of Berkeley scientists who have discovered a pattern of mass extinctions every 62 million years. By using the late J. John Sepkoski's compendium of the first and last stratigraphic appearances of 36,380 marine genera over the past 500 million years, the two found a strong statistically 62.3-million-year extinction cycle.

This differs from the work published in 1984 by Sepkoski and Raup who argued that there is a 26 million year cyclical pattern to the extinction events recorded in the fossil record, possibly caused by an extra-terrestrial cause (a Planet X or a Nemesis Star). 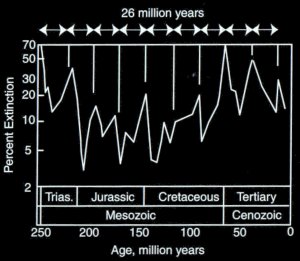 David Perlman of the San Francisco Chronicle has this article on the new findings.