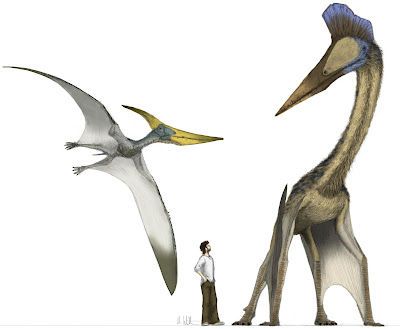 Report suggests that pterosaurs used four legs to launch. Two were ultra-strong wings which, when folded and balanced on a knuckle, served as front “legs” that helped the creature to walk — and leap.

A supersized glitch is inherent in the traditional bipedal launch model, Habib notes: “If a creature takes off like a bird, it should only be able to get as big as the biggest bird.” However, Habib reports that pterosaurs had much stronger “arms” than legs. The reverse is true of birds.

Birds use legs to launch, wings to flap. They don’t get launch power from wings or flight power from legs. In fact, when a bird is aloft, its legs become payload, or cargo. The muscle on the two back limbs that provides the power to launch must be carried and therefore limits size. Released of that handicap by employing all four legs to launch, giant pterosaurs could fly despite the fact that they were roughly the same size and shape as modern-day giraffes.

The wings of these fantastic hairy reptiles propelled the creatures into the air during take-offs that Habib describes as leap-frogging long-jumps. Then, with wings snapping out, off they’d fly.

Using all four legs, it takes less than a second to get off of flat ground, no wind, no cliffs,” he said. “This was a good thing to be able to do if you lived in the late Cretaceous period and there were hungry tyrannosaurs wandering around.”
Posted by Michael J. Ryan, Ph.D. at 8:36 AM