Why have some of our genes evolved rapidly? It is widely believed that Darwinian natural selection is responsible, but new research suggests that a separate neutral (nonadaptive) process has made a significant contribution to human evolution.

The researchers identified fast evolving human genes by comparing our genome with those of other primates. Surprisingly, the patterns of molecular evolution in many of the genes they found did not contain signals of natural selection. Instead, their evidence suggests that a separate process known as biased gene conversion (BGC) has speeded up the rate of evolution in certain genes. This process increases the rate at which certain mutations spread through a population, regardless of whether they are beneficial or harmful. 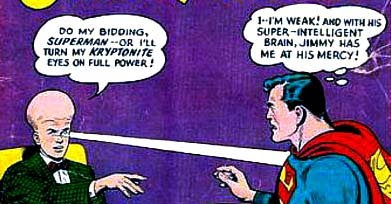 © DC Comics
"The research not only increases our understanding of human evolution, but also suggests that many techniques used by evolutionary biologists to detect selection may be flawed" says Matthew Webster

BGC is thought to be strongest in regions of high recombination, and can cause harmful mutations can spread through populations. The results lead to the provocative hypothesis that, rather than being the result of Darwinian selection for new adaptations, many of the genetic changes leading to human-specific characters may be the result of the fixation of harmful mutations. This contrasts the traditional Darwinistic view that they are the result of natural selection in favour of adaptive mutations.
Posted by Michael J. Ryan, Ph.D. at 10:47 AM