The Braincase & Jaws of a Devonian 'Acanthodian' 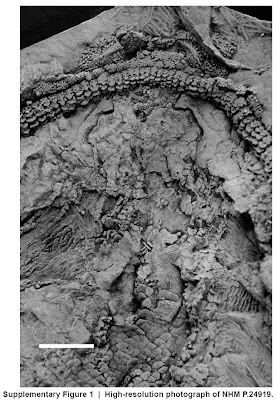 Abstract: Modern gnathostomes (jawed vertebrates) emerged in the early Palaeozoic era, but this event remains unclear owing to a scant early fossil record. The exclusively Palaeozoic 'acanthodians' are possibly the earliest gnathostome group and exhibit a mosaic of shark- and bony fish-like characters that has long given them prominence in discussions of early gnathostome evolution. Their relationships with modern gnathostomes have remained mysterious, partly because their un-mineralized endoskeletons rarely fossilized.

Here I present the first-known braincase of an Early Devonian (approximately 418–412 Ma) acanthodian, Ptomacanthus anglicus, and re-evaluate the interrelationships of basal gnathostomes. Acanthodian braincases have previously been represented by a single genus, Acanthodes, which occurs more than 100 million years later in the fossil record.

The braincase of Ptomacanthus differs radically from the osteichthyan-like braincase of Acanthodes in exhibiting several plesiomorphic features shared with placoderms and some early chondrichthyans. Most striking is its extremely short sphenoid region and its jaw suspension, which displays features intermediate between some Palaeozoic chondrichthyans and osteichthyans. 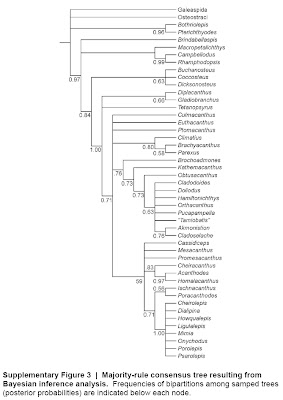 Click to enlarge
Phylogenetic analysis resolves Ptomacanthus as either the most basal chondrichthyan or as the sister group of all living gnathostomes. These new data alter earlier conceptions of basal gnathostome phylogeny and thus help to provide a more detailed picture of the acquisition of early gnathostome characters.

Read the press release from Uppsala U.

I’m sure that Martin will have more about this up on his “Lancet” blog.

And belated congrats to Martin for defending his Ph.D. on "Endocranial Morphology and Phylogeny of Palaeozoic Gnathostomes" last Novemeber!