Dobzhansky is noted for being one of the architects of the modern Synthetic Theory of evolution. During the first 20 years of the 20th century, Darwin's theory of natural selection had fallen out of favor among scientists. Many thought it 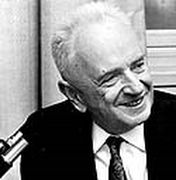 insufficient to explain the origin of adaptations, while new discoveries of gene mutations seemed to them to be incompatible with Darwinian models of change.

Later, working with Sewall Wright, he went on to demonstrate how evolution can produce stability and equilibrium in populations rather than constant directional change. link. image.
Posted by Michael J. Ryan, Ph.D. at 10:22 AM