Evidence of Combat in Triceratops 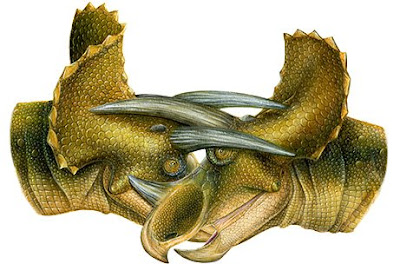 Image by Lukas Panzarin/Raymond M. Alf Museum of Paleontology
Abstract [edited]: The horns and frill of Triceratops and other horned dinosaurs) are interpreted variously as display structures or as weapons against conspecifics and predators. Lesions (in the form of periosteal reactive bone, healing fractures, and alleged punctures) on Triceratops skulls have been used as anecdotal support of intraspecific combat similar to that in modern horned and antlered animals. If ceratopsids with different cranial morphologies used their horns in such combat, this should be reflected in the rates of lesion occurrence across the skull. 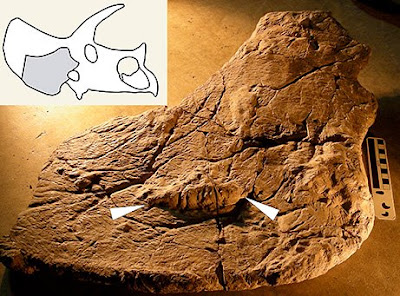 We used a G-test of independence to compare incidence rates of lesions in Triceratops (which possesses two large brow horns and a smaller nasal horn) and the related ceratopsid Centrosaurus (with a large nasal horn and small brow horns), for the nasal, jugal, squamosal, and parietal bones of the skull. The two taxa differ significantly in the occurrence of lesions on the squamosal bone of the frill (P = 0.002), but not in other cranial bones (P>0.20).

This pattern is consistent with Triceratops using its horns in combat and the frill being adapted as a protective structure for this taxon. Lower pathology rates in Centrosaurus may indicate visual rather than physical use of cranial ornamentation in this genus, or a form of combat focused on the body rather than the head.