Pink Iguana On The Galápagos 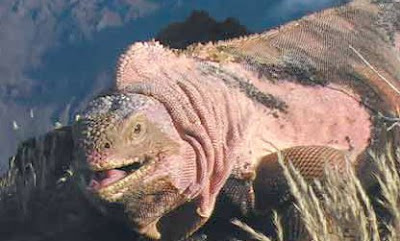 Photo: National Geographic
Abstract: Despite the attention given to them, the Galápagos have not yet finished offering evolutionary novelties. When Darwin visited the Galápagos, he observed both marine (Amblyrhynchus) and land (Conolophus) iguanas but did not encounter a rare pink black-striped land iguana (herein referred to as “rosada,” meaning “pink” in Spanish), which, surprisingly, remained unseen until 1986.

Here, we show that substantial genetic isolation exists between the rosada and syntopic yellow forms and that the rosada is basal to extant taxonomically recognized Galápagos land iguanas. The rosada, whose present distribution is a conundrum, is a relict lineage whose origin dates back to a period when at least some of the present-day islands had not yet formed.

So far, this species is the only evidence of ancient diversification along the Galápagos land iguana lineage and documents one of the oldest events of divergence ever recorded in the Galápagos. Conservation efforts are needed to prevent this form, identified by us as a good species, from extinction.

Read the story at National Geographic News.
Posted by Michael J. Ryan, Ph.D. at 10:03 AM