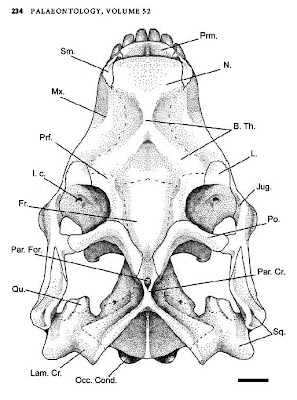 Abstract: Remains of a peculiar traversodontid cynodont, Protuberum cabralensis gen. et sp. nov., are described herein. The material was collected from two outcrops representing the Therapsid Cenozone (Middle Triassic) of the Santa Maria Formation, and consists of a cranium with most of its dentition preserved and an associated postcranial skeleton.

The upper postcanines have two sharp cusps that are connected by a medial crest on unworn postcanines. The specimens possess several autapomorphies, including: (1) presence of thickened bone on the dorsal surface of the skull; (2) thick dorsal ribs, with remarkable processes situated on their dorsal borders that decrease in size distally; and (3) an iliac blade with a series of rugosities along its dorsal border. The lumbar ribs bear overlapping costal plates and have distally projecting rib shafts that differ from the pattern observed in Thrinaxodon, Pascualgnathus and Cynognathus.
Posted by Michael J. Ryan, Ph.D. at 3:05 PM