"Hobbits" Were A Separate Species 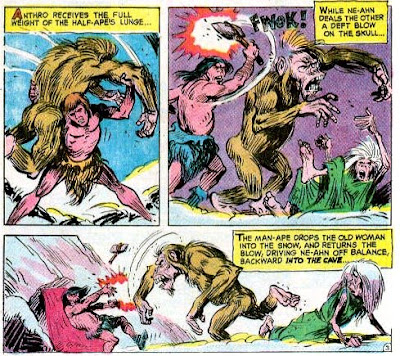 Anthro © DC Comics
Scientists continue to debate whether the Flores "hobbits" were a separate species
Abstract [edit]: The unique set of morphological characteristics of the Liang Bua hominins (Homo floresiensis) has been attributed to explanations as diverse as insular dwarfism and pathological microcephaly. This study examined the relationship between cranial size and shape across a range of hominin and African ape species to test whether or not cranial morphology of LB1 is consistent with the basic pattern of static allometry present in these various taxa.

Correlations between size and 3D cranial shape were explored using principal components analysis in shape space and in Procrustes form space. Additionally, patterns of static allometry within both modern humans and Plio-Pleistocene hominins were used to simulate the expected cranial shapes of each group at the size of LB1. These hypothetical specimens were compared to LB1 both visually and statistically.

A model of Homo floresiensis's skull (right) is shown with a modern human's (left) and a fragment of a recently found skull from Palau (center). Photo: Stephen Alvarez

Results of most analyses indicated that LB1 best fits predictions for a small specimen of fossil Homo but not for a small modern human. This was especially true for analyses of neurocranial landmarks. Results from the whole cranium were less clear about the specific affinities of LB1, but, importantly, demonstrated that aspects of facial morphology associated with smaller size converge on modern human morphology. This suggests that facial similarities between LB1 and anatomically modern humans may not be indicative of a close relationship.

Taken together, these findings suggest that H. floresiensis was most likely the diminutive descendant of a species of archaic Homo, although the details of this evolutionary history remain obscure.