Producer Charles H. Schneer, who worked with Ray Harryhausen on films including "Jason and the Argonauts," died Jan. 21 in Boca Raton, Fla. 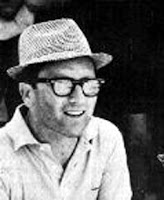 He was 88. Schneer produced their biggest hit of the 1950s, "The Seventh Voyage of Sinbad." They continued with Columbia sci-fi titles including "The Three Worlds of Gulliver," "Mysterious Island" and the influential "Jason and the Argonauts."

He later worked with with Harryhausen on "The Valley of Gwangi," "The Golden Voyage of Sinbad," "Sinbad and the Eye of the Tiger" and their final film, the bigger-budget "Clash of the Titans". Story from Variety.